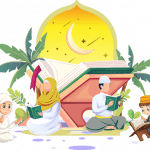 This program provides selections of more than eight subjects that aim to give a general Islamic glance for students in an easy and exciting way. Students will study the meaning of some verses, stories of the prophetic biography, some Fiqh issues, sayings of Prophet Mohammed, stories of the Islamic history, general information, and more. Subjects for every field of study would be chosen carefully based on every student, his age and experience, etc.

If you are a Muslim living in a Non-Muslim country. If you live in a place that lacks Mosques “Masajid” or Islamic schools.

If you are looking for a teacher for Islamic studies to help your children learn the basics of their religion.

If you do not have the time or talent to teach your children the basic lessons of Islam Religion, such as worship like prayer, intelligence, honoring parents, fasting, biography of the Prophet Muhammad (ﷺ) “All Prayers and Blessings of Allah be upon him” and much more important Islamic lessons.

As the interest in teaching children Islamic studies at an early age is one of the priorities that parents should take into account and exert effort in it. 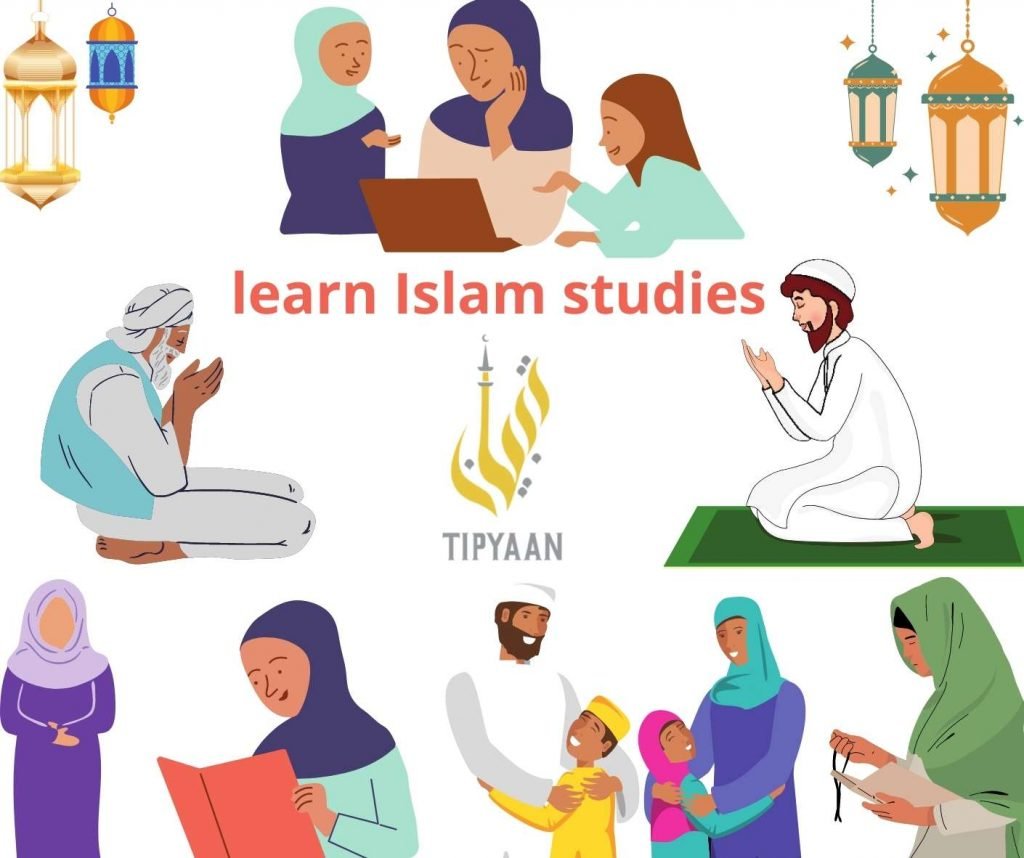 What Your Child Will Learn in Basic Islamic Studies Course

The content of this course has been adopted and designed for teaching Islamic studies for kids at an age-appropriate level while keeping into consideration the specific needs and requirements of Muslims living in non-Muslim countries. By the end of this course, your kid will learn about many Islamic subjects including:

AQIDAH defines a Muslim and teaching your kids, at least, the basics of Belief “IMAN” and Islamic studies for kids that can deeply instill the love of Islam in their little hearts and make them strongly adhere to the religion. Also, Prophet Muhammad (ﷺ) “All Prayers and Blessings of Allah be upon him,” said: “If Allah wants to do good to a person, He makes him comprehend the religion. (Sahih Al-Bukhari).

Numerous great manners can be learned from Prophet Muhammad (ﷺ) “All Prayers and Blessings of Allah be upon him” and other prophets. They were sent as guidance to the entire human race to make us fulfill the purpose of life and achieve success in it, and the Hereafter.

Shedding light on our history when teaching Islamic studies for kids is crucial. It goes without saying that learning from past incidents and being aware of how thriving the Islamic eras were, are one of the main factors that form a strong and proud Muslim generation.

The book of Allah “Glorified and Exalted Be He” is perceived as a complete code of life. It has been sent as a mercy to the entire human race, not just Muslims. In addition to that, Prophet Muhammad (ﷺ) “All Prayers and Blessings of Allah be upon him” said, “The best among you (Muslims) are those who learn the Qur’an and teach it.” (Sahih Al-Bukhari).

Children get influenced by what their parents do before them. The earlier you teach them good habits and other Islamic studies for kids, the more likely these habits will be hard to break even when they get older.

Prophet Muhammad (ﷺ) “All Prayers and Blessings of Allah be upon him” was the best of mankind. He was a literal walking Qur’an as mentioned once by Aishah “May Allah be pleased with her” in a HADITH. Our main aim here is to instill the love of him in our kids’ hearts and teach them more about his SEERAH and what he advised us to do.

It is said that the effect of learning at an early age is like engraving on a stone. Also, acquiring knowledge and teaching Islamic manners for kids entails numerous rewards from Allah “Glorified and Exalted Be He” and is of great importance in Islam.

DU’A is definitely the most powerful weapon of believers! Allah “Glorified and Exalted Be He,” says: “… and the men who remember Allah often and the women who do so – for them Allah has prepared forgiveness and a great reward” (Al-Ahzab Surah 35).

1- We at TIPYAAN ACADEMY put every effort into providing the best educational services to our students.

2- We provide specialized Male and Female Teachers with the highest level of proficiency in the field.

3- All our teachers have been tested and selected under certain criteria, including that the teacher has memorized the Qur’an and graduated from one of the World-Famous Islamic Universities such as Al-Azhar University and the Islamic University; and that his native language is the Arabic Language.

In addition, he has an excellent level of English and has a high level of ability to communicate and interact with children in an effective and enjoyable way.

4- At TIPYAAN ACADEMY, we seek to provide the appropriate time for our students to do the classes, with complete flexibility in determining their own schedule.

5- Our curricula have been developed by experts in the field, which have proved effective and successful with our students.

6- All services that you seek in the fields of learning the Qur’an, Arabic language, and Islamic studies, whether for you or your children, will be provided to you by TIPYAAN ACADEMY at the highest level and at the lowest cost.

7- At TIPYAAN ACADEMY, we also seek to let our students reach the level of understanding and speaking the Arabic language to reach an understanding of the verses and meanings of the Qur’an.

Meaning of Selected Verses of the Quran

The power of the words of Allah is incredible, we are choosing verses of the Quran, based on the student case, and discussing them in a way to let the student receive the massages of the Quran easily with their different types

Based on the student case, we choses events and incidents from the biography of Prophet Mohammed focusing on some educational meaning

Basic aspects of Fiqh that are essential for the Muslim Live

Muslim cannot go without knowing the Islamic rules that governs his everyday actions, here we focus on that rules according to the student age.

Islamic morals with examples of the prominent figures

Islam calls the highest morals and etiquette, we present the Islamic ethics along with a practical and true stories

Selected sayings of the prophet Mohamed

Here is the area of the wisdom of Prophet Muhammad, we go through the Sunnah sayings to achieve certain aims.

Our children are surrounded by many thoughts and ideas, this part aims to let them stand on stable ground

Stories have great effect on human hearts, and give our students a glance over our honorable history, and let them understand their religion better.

Through pondering in the universe and discovering its amazing secrets and how it works, student can feel better about the Power, Mercy, Knowledge of Allah

How parents shall involve?

tpaca-admin2021-09-17T00:52:56+02:00One of the main factors for the success of online learning is the level of responsibility that student takes. As for young students, the involvement of parents is very important. With our live support, we expect parents to take their role and react with our continuous reports in order to ensure the success of educational process.

tpaca-admin2021-08-16T19:36:47+02:00Tipyaan Academy is an online professional platform supervised by educational specialists. Tipyaan aims to bring out Muslim character that can stands against the storm of unwilled social and cultural norms speared in non-Muslim countries. Out of that aim, we at Tipyaan clearly focus on understanding and absorbing Islamic principles and fundamentals. We also help our students to memorize Quran, and read its language.

Would I interact with my teacher alone, or share my sessions with a group of students?

I am a parent & I am worried about having my kids meeting a strange teacher online. Does “Tipyaan academy” provide a safe learning environment for my kids?

tpaca-admin2021-08-16T19:36:32+02:00Absolutely Yes. “Tipyaan academy” is the only Islamic academy across the Globe that provides parents with 100% safe online environment: with Asynchronous online communication with the teacher: there is no direct chat between child and teacher, so be confidence that your child would be save with us.

What if I am waiting online and my tutor is not there?

Is learning through Tipyaan Academy effective?

tpaca-admin2021-08-16T19:36:18+02:00-There’s no difference between real sessions and digital ones through TIPYAAN ACADEMY except that the later allows you to learn at any time and at any place. You also get free evaluation lesson once you register; this allows you to examine the TIPYAAN Academy’s effectiveness. -Technological advancements have led to improved audio/video communication quality on the Internet which has led to major growth in online education. Online education programs are available in nearly every subject and even the world’s leading universities are providing courses online. Studying online is also very convenient and adjusts to everyone’s schedule. Students have the ability to complete their course at their own pace.
See All FAQs

has been added to your cart.
Checkout